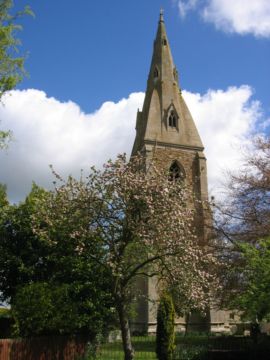 The broach spire of St. Mary’s Church is a prominent landmark across the River Witham, from the railway to the east and the A1 to the west. These broach spires, where the spire grows out of the tower without a parapet or pinnacles and is supported only by its broaches at the four corners, were the earliest spires to be built (13th century). The Church itself is of distinctive architectural and monumental interest. The perpendicular south porch, with its canopied niches and ancient roof, conceals the much earlier English south doorway, with its clustered shafts and stiff leaf capitals. Inside, the south arcade is simple, sturdy early English work, with the north arcade and its elegant clustered columns, is a little later of the decorated period. The great mystery of the nave is the existence of the two vesica windows in the spandrels of the south arcade which perhaps survive from an earlier aisle-less church. In the base of one of these piers there is a reused carved Norman stone, which must be a relic of the earlier building and on its capital stiff carving was begun, but never completed. At the east end of the north aisle is the blocked doorway to the former Rood staircase. In the churchyard there is a charming 17th century sundial and a number of old tombs and headstones in Swithland slate and beyond the sundial is the celebrated laburnum tree leaning over the wall of the Hall, which is considered to be the largest and oldest in England.

Coffee mornings are held in the church on the third Saturday in each month at 1030 am to 12 noon.  All welcome.